A felt tip marker can be a useful art supply. If you want to use a high quality marker pen from a well established brand, and don’t need a particularly thick line, the Pentel Sign Pen may be the thing you’re looking for.

The pen itself is black, fairly flat, combining the worst of matte and shiny blacks. The base has a small tan disk. It’s got a slightly hexagonal design, and both ends taper down to a cylinder. The cap is in the same design. The clip is a long piece of plastic, and it ends in a slightly sharp, shirt tearing, tip. The grip section tapers down to a metal holder and a thin felt tip. 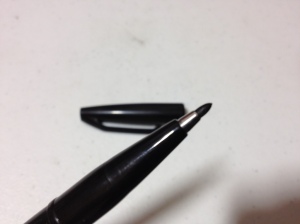 The ink is a nice black, and it is very black. The tip doesn’t seem to have much line variation. It looks about the same no matter the pressure. Using enough pressure to give variation would damage the tip. Tilting the tip can cause some variation. The ink is mildly waterproof. It does turn grey and does smudge heavily, though it doesn’t fully disappear and can in most cases be read.

So if you need a fine-to-medium point, water-resistant black marker, which sounds specific but really isn’t, this could be the pen for you. In my opinion it is more comfortable than a sharpie, and is a bit smaller, which is nice. It is a very good pen for line art especially on larger works.