So you want to ink a drawing you did, but you can’t find Microns, or any other technical pen. You certainly don’t want to use a ballpoint. What do you do? Well, the Sharpie retractable pen may be an answer. The black version, to be precise.

The pen itself is a shiny black that gets finger prints on it constantly, though it cleans easily. The body of the pen starts out wide and tapers toward the rear of the pen. Near the front is a rubberized grip section with some grippiness to it. Sharpie pen is written on the back near the clip in silver. The pen looks like it can be taken apart in several places, but it can’t. 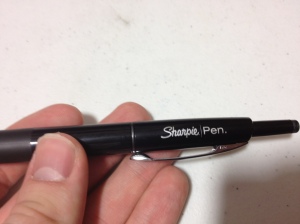 The clip is metal, it’s rather stiff and doesn’t easily go into or out of a shirt pocket. The click mechanism in the back for retracting the pen feels solid, but the plunger is loose and feels a little flimsy.

As for the most important part: the tip. It’s a fine tip, with the standard very black Sharpie color. It puts down a fairly smooth line. I would compare it to a Micron 01 or that range, but it’s really slightly smaller. The tipping material is very stiff and doesn’t like to bend, which leads to less line variation but a longer usable life. It’s not a permanent pen, or at least permanent like the markers. It writes and sticks on most surfaces, but not on all, but it is very black on everything.

Overall is it going to replace a good technical pen? No, but it is very good for inking in a pinch or if you want a less-used line width in your art. It writes well, it looks good. The main problems for me stem from the fatness of the pen and the cheap-feeling mechanisms. Is it for you? Maybe. I’d recommend trying it out and maybe keeping a few around just in case.