Well, this series has taken me much longer to get out than I anticipated, but we’re in the final stretch with the last 30 colors (and the sharpener). Let’s take a look.

Yellow Orange – Indeed, a slightly lighter and unpleasantly toned orange, this color is like a more saturated “Macaroni and Cheese”, with coverage being fine, but spots of unevenness. It could in some cases be used for citrus fruit, but I think its best use would be for fossilized amber.

Vivid Tangerine – A light, almost neon, Orange, Vivid Tangerine looks slightly like the fruit it’s named after, and might be nice for things such as mangos or apricots. It does cover pretty well, but has a lot of variation in the color.

Orange – One of the last classic colors, orange is a nice deep… orange that is a bit off for the fruit but works well for most man-made items that are orange. It’s got nice, even coverage and is generally pleasant to look at.

Mango Tango – Closer to a pinkish-red than to anything related to mangos this color is similar to that of many fruity drinks and some artificially flavored candies. And it’s got decent coverage with a bit of splotchyness.

Red Orange – Aptly named Red Orange is a very reddish orange color (in fact, mostly red) that has okay coverage with some intensity variation. It’s a bit dull but probably a more apt representation of the many red things we have like fire trucks and extinguishers.

Sunset Orange – A little brighter than Red Orange, this color shares many of the same attributes as that color, but, as the name suggests, it might be more applicable for sunsets and hot embers.

Burnt Orange – The most stark on the page of any of the crayons, this color looks almost like an oil sienna, and covers very well but with a lot of color variation. It makes a nice UT (University of Texas) Longhorn and can give a lot of variety to trees or other wooden objects. (It also just kinda feels… sticky.)

Tan – Well-named, but a bit darker than one would expect, Tan is a pleasant lighter brown that covers well and is fairly even. It’s a good rock or dirt color, and can give variety in wood color when mixed with other browns.

Peach – While not looking much like a peach, this very light, orangeish brown does look like the peach we associate with skin or peach ice cream. It’s got pretty good coverage and is one of the few acceptable skin tones in the whole lineup.

Melon – This very faint color has hints of brown and red, but could pass for the color of a watermelon if you squint. It wouldn’t be the most apt representation in the set, though. Coverage is less than average, and there isn’t much variation. It works as a good highlighter color to mix in with reds or browns, and might make a good color for Martian dust.

Apricot – Looking more like an apricot than Peach looks like peaches, Apricot still doesn’t resemble its namesake very much, but is also a good skin tone. It’s quite faint and the coverage is sub-par, but it does looks quit realistic (for “white” skin) and it can serve as a nice highlight color.

Tumbleweed – As a person who grew up around tumbleweeds I can’t really sat this color is accurate, but it is a nice dusty brown with a hint of “gold”. The coverage isn’t the best but that adds to a dirty aesthetic and means the color works very well for dust, dirt, and dried plants.

Desert Sand – Being a very light and pale brown that doesn’t cover perfectly and has a little bit of variation means that this color does indeed look very much like (dry) sand and it would do equally well as dust in the wind.

Burnt Sienna – I don’t really see the comparison to the name here, it just doesn’t “pop” enough, or feel really “burnt”. It’s just a light-ish brown with the tiniest hint of red that doesn’t cover too well and is mostly useful as an additional wood color.

Raw Sienna – More sepia than sienna, this color is a washed-out brown that covers nicely and would be good for old-timey photographs or dirt that’s on the dryer side.

Bittersweet – I don’t think they really nailed the name here, as I can see a few other colors evoking a “bittersweet” feeling, but not this one. This reddish brown covers decently, and has a little bit of variation in there. It’s pretty close to a true brick or clay color, and might work for a candy of some kind as the name implies. (And it’s about as much like the flower as any other flower-based color here.)

Mahogany – Similar enough to the wood to get a pass from me, Mahogany is a deep reddish brown with decent coverage. It works great for old, faded barns and bricks, while sometimes being useful for variations in wood tones.

Fuzzy Wuzzy – If Fuzzy Wuzzy was a purplish brown bear then this color’s name would be accurate. It’s almost like the color of the teddy bear from Toy Story after it’s been through a few too many washes. It covers well-enough and can be used wherever you need a dirty, faded purple.

Chestnut – A deep brown with a touch of purple, Chestnut isn’t quite like the nut or the wood, but it does make a good color to add into a set of woods, or perhaps as a very dark wine. The coverage might be a little lacking for that, though.

Beaver – A dark grey with a subtle hint of brown, the name of Beaver here is irrelevant, but this is a very good color for asphalt or faded tire rubber. It’s helped here by the good coverage, with some variation in there.

Brown – Getting close to the end of the classic colors, Brown is just brown, though a slightly lighter one. It’s got good coverage and is there for all your dirt, tree, and brunette needs. (And it might pass as a skin color, but not really.)

Sepia – Much darker and more traditionally “brown” than I usually expect, this Sepia has some good coverage but because of how dark it is it shows up much more than other colors. It makes a good wood or dirt color, but probably isn’t the right choice for old photographs.

Antique Brass – Closer in my mind to dull copper, this brown is slightly metallic and covers decently enough, but looks very flat. Unfortunately it would probably work best as a dirt or bark color, and not as a metal object.

Copper – Surprisingly, even though it’s metallic, this is the only brown color in the set I’d really consider close to a skin tone. It’s a lightish brown with some very good coverage and some nice variation. It could work as a metal, but I’d stick to skin or wood with it.

Gold – Always a hard color to make, this Gold looks like a worn and scuffed version of the metal. And it’s got good coverage, but it doesn’t quite make it. It’s not the best representation, and it’s more akin to less-copper brass, but it’ll do for that and not much else.

Silver – A shiny lighter grey, silver has good coverage, a lot of variation, and plays the part of a generic metal quite well, though I wouldn’t say it’s very good for silver, it’s closer to steel.

Timberwolf – I like the name, and this pale, warm grey does resemble some types of wolves (some times). It’s not got the best coverage, but some variation in there makes it good for fog or sleet.

Grey – On the darker (and cooler) side of grey there is… Grey, which has decent coverage and decent tone. It works quite well for concrete, ashes, or shadow.

Shadow – On the other hand, Shadow doesn’t work well for shadows. This warm, mid-tone grey is a very strange color that I really can’t place. It’s almost like it has a bit of green in it too. The coverage is fine but the variation makes things a bit stripy and weird.

Black – And now for the final of the classic 8 colors, Black isn’t as dark as I remember it being, and it does have problems with coverage that I do remember, but it is the darkest crayon here, and it works well for nighttime, shadows, writing, and just being an antithesis for white.

Sharpener – The Sharpener that was included in my package is a fascinating little (it’s not very little, actually) thing. It’s a 4 ½” tall statue of the character “Tip”, who is an anthropomorphic crayon. The tip of the crayon here is the sharpener, which is all plastic. The given hole is much larger than the crayons provided, but the “blades” do sort of self-index toward the center as you insert the crayon. Rotating the crayon with a little pressure does effectively shave off the sides of the crayon until there is a cone of about the same length as the factory crayons, and an equally blunt tip. It works easily and smoothly, and all the shavings are stored inside until you remove the top bit (just above the character’s eyes) and dump them out. 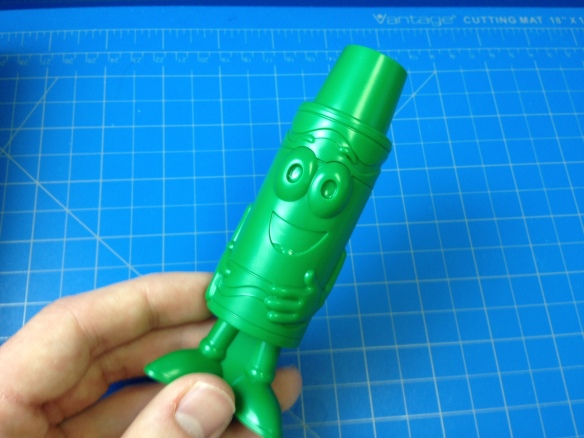 And there we have it, the 120 crayon Crayola box. Is it worth it? For the price, sure, it’s quite inexpensive, but the colors leave much to be desired. And while I do think a child’s bragging rights are worth something, as far as making art goes, this set is unnecessary. Crayons (of the school variety) are imperfect tools that are hard to make art with already, and many of these colors are useless on their own while being unable to really mix with any of the other colors. It just doesn’t really help that much, and kids can easily become overwhelmed with choices (they’ll basically either just use the same crayons they would get in smaller packs until they’re gone or use any “green” as green). The sharpener is neat, and having a bunch of crayons around is “cool” (I think it’s cool… maybe “fun”), but I don’t see a significant upgrade here from the 48 or 96, especially since there are a few manufacturing defects regarding the paper wrap, holes in the crayons, and receiving duplicate colors. But also it’s like $7 and I can’t tell you how to live your life.