For as much as they are almost “looked down” upon in the world of writing implements, and for as cheap a product as they are, Bic pens are very sturdy and reliable line-making machines, with newer ink formulations making them smoother than any pen in the price range seems to deserve to be. Their simple and effective designs have endured the tests of time, making the Cristal ubiquitous, and others, like the 4 color pen, an oddity many have toyed with and some people swear by. Is combining 4 pens into one really necessary? Probably not. But does it have convenient uses for those who still write thing down? Let’s take a look. 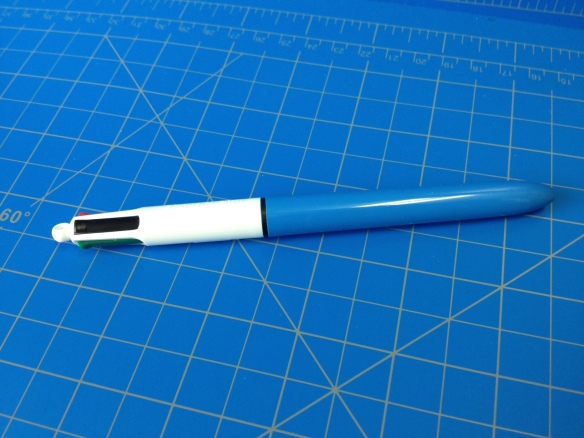 The body of the pen is quite simple, with a retro vibe that probably comes from the design being relatively unchanged from its introduction decades ago. The main barrel is a light blue (or orange for the fine version) cylinder making up 2/3 of the length that begins to taper as it gets closer to the writing end. On top of this is a black band, which connects to the white top. This top section has a very “angular” molded-in plastic clip, a lanyard hole/rotary telephone dialer on top (rather intrusively), and 4 slots in which 4 plungers of different colors sit. When one of the plungers is depressed, a pen tip of a corresponding color pokes out of the front. Unscrewing the blue portion reveals that the mechanism here is quite simple: the 4 ink tubes (with tips) are situated equally distanced from each other inside the barrel. When one pushes the plunger, an ink tube is moved forward and bent via the barrel taper to come out the hole in the center, and a catch holds the plunger down until depressing another one causes it to spring back up. Unfortunately, the way things are constructed, the ink tubes are not replaceable, so if you run out, you’re stuck. The only other thing on the body is the Bic logo and “made in France” molded into the side of the white upper portion. It’s nice that it won’t rub off, but it doesn’t give you very much information to go on.

The performance is decent. The inks are quite smooth for a ballpoint, and don’t cramp the hand too much, but there is more blobbing than I would like and some of the lesser-used colors (like green) often have startup problems from dried ink on the tip. Despite being a shiny plastic, the pen holds well in the hand. Being a bit larger than your average pen to accommodate 4 ink tubes, it has more surface area to hold on to and it isn’t slippery. It might not fit in some smaller pencil holders, though. I’ve taken a look at the more common Bic colors before, and they aren’t changed here. All are a bit more wimpy than I would like, especially the green, followed by the red, but they go down well and are recognizable while having the standard ballpoint advantages like being water-fast. The clip is pretty bad if you ask me, having almost no flex, but it will probably do its job. 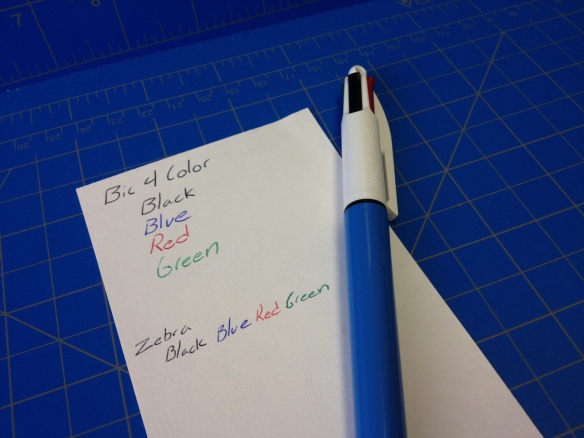 For art, this pen probably isn’t worth considering unless you’re challenging yourself. But for those that like stay organized with different colors in their planners, need a red pen and don’t want to keep track of 2 pens, or don’t want to run out of ink on the fly, this is a pretty good option. It’s got a nice retro feel if you’re into that sort of thing (understanding that it’s a little unprofessional) and even through it’s disposable, the materials are quality enough it won’t fall apart on you. For someone like me, who carries around 4 pens in 4 colors this might be a lifesaver. It’s not the end-all pen, but it’s a nice office-weight pen, designed to be inexpensive and get things done, which it does quite well at.