Correction fluid is quite a useful tool and an art supply in its own right on some occasions. But those bottles are hard to lug around, and the brush tips difficult to manipulate to really cover what you want. Both of the major correction fluid brands have attempted to rectify this situation with pen applicators for their product. But how well do they really work in comparison? And how do they look head to head? 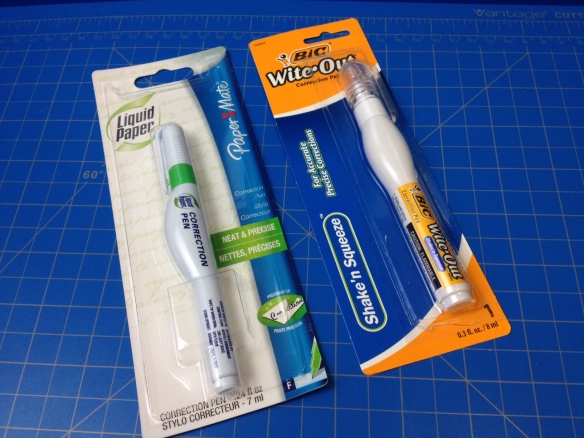 Both are rather fat, pen-sized items at a little over 5 inches in length. Each is roughly cylindrical with a cap on one end, a squeezable bulge in the middle, and a posting step-down at the other end. The amount of fluid contained in each is surprisingly similar: being 7ml for the Liquid Paper and 8ml for the Bic Wite Out. But despite having only a slightly larger capacity, the Bic pen is noticeably larger in almost every way. It is a little bit longer, the tube diameter is about 125% that of the other, and the squeezable bulge extends out in two humps rather than the one of its smaller counterpart. Each one has a cap with an integrated clip, through the Bic one is translucent and more brittle-feeling than the LP which matches with the rest of the pen. The main color of each pen is an off-white, the differences of which mirror the differences in the colors of the fluids inside, with the Wite Out being a “warmer” and the LP being a “cooler” white. There’s a lot more information on the Wite Out pen, which is printed on a label wrapped around the bottom as opposed to the Liquid Paper which has just enough info printed directly on the plastic. And both pens have a strange “arrow” (triangle) pointing toward the tip molded into their plastic. 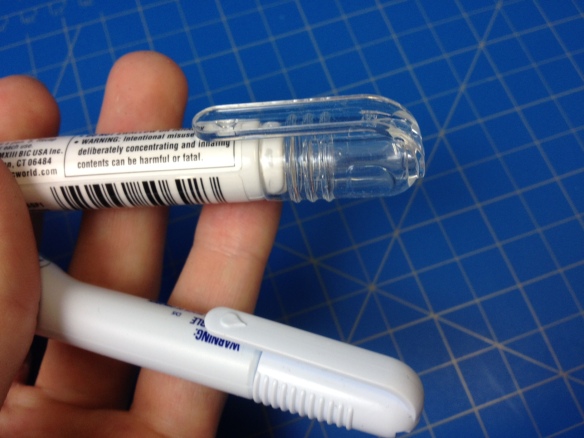 Both pens are used in the same fashion: shake it up, remove cap and any little dried bits (there always is some, no matter how well you wipe it off), press down firmly, and then write with it like it’s a pen, squeezing and pressing to increase the flow when needed (then wipe the tip off and re-cap). Both do a pretty good job, but each has its own quirks. The Bic pen is harder to start as the tip is wider and the fluid dries more rigidly. It tends to cover nicely in one stroke but the width of that stroke is a bit unpredictable, and it’s pretty poor at “writing” on its own. The fluid is basically the same as the Wite Out quick dry (or regular), drying fairly quickly and smoothly over the paper, but noticeably sitting on top of it because it is a warmer white than the average piece of paper. The Liquid Paper produces a thinner line that is easier to write with, but can sometimes require multiple, finicky applications to really cover a mistake. The fluid does start to dry pretty fast, but it quickly becomes a bit “gummy”, and if you need multiple coats and aren’t fast enough this can easily lead to unsightly bumps in the finish. If you can get it down smooth, though, it blends in much better with the paper, being closer to the cool white of office copy reams.

Both clips are serviceable when the pen is capped, with the Liquid Paper’s being a little weaker when clipping, but less brittle. As mentioned, both caps have posting stumps on the back. The Wite Out posts quite tightly and securely, while the Liquid Paper, even with no fear of falling off, seems a bit wimpy-er. Both pens have worked for me and not dried up over several months, and I happen to be in possession of another Liquid Paper pen dated 1989, which surprisingly still works (but not as well). I don’t know if that will apply to these new ones, but it’s a good omen. (The differences between the old and the new are minimal: the cap has had ridges added on the sides and a droplet shape on the clip, between the cap and body there is now a green band, that aforementioned triangle has been added, the applicator tip has been modified to add more metal, and the old has an applied label rather than material printed directly on the barrel). 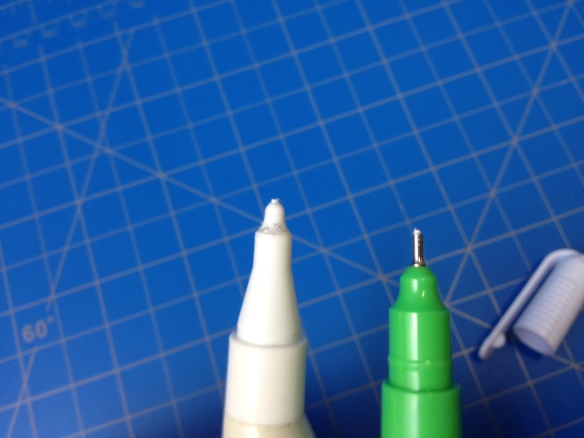 Neither pen is clearly better than the other, so it mostly comes down to personal preference. The Wite Out has: a larger capacity, a thicker line, simple application, and is easier to hold. While the Liquid Paper is: smaller, easier to start, and has a much more true-to-paper tone. If you’re just looking for a correction pen, you can’t really go wrong with either, so I wouldn’t go out of my way to find one or the other. As it stands, I’ll be using the Liquid Paper in my pencil case for on-the-go stuff and the Wite Out at the desk for when I need something more fine than the sponge applicator. And I think both’ll be lasting me a pretty long time. 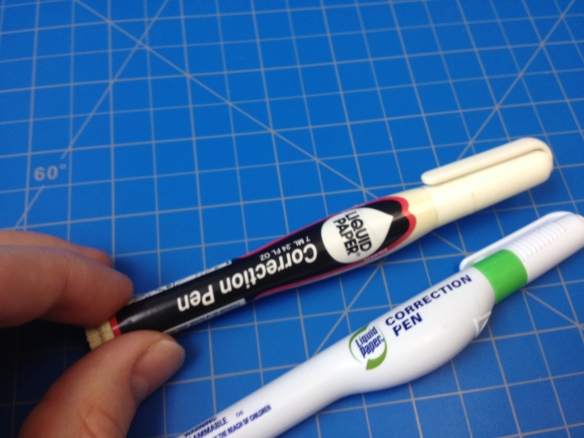