All right, on to the art-making things. Let’s start with pencils, specifically HB or No.2 pencils. The ones I’m reviewing today are from dollar general and are 10 cents apiece. So they’re the cheap, starting pencil.

The pencils are small and light, roughly 6 and 3/4 inches to start, with about a half inch eraser. The wood is cheap, it’s splintery and rough. The paint is applied poorly, with parts flaking off and wood showing through, but it does its job and the letters are easy enough to read. The eraser is all right, it erases, but not all the way. Usable for sketches and writing. The eraser is hard and sometimes smears the graphite instead of erasing.

But that is all roughly cosmetic. One can get other erasers and the paint does its job. It’s really about the graphite. And that’s hard to screw up. HB’s are a fairly hard pencil, really medium, leaning to the soft end. They’re easy to draw with and give a large amount of control. The lead is not brittle, and stays in its wooden case. The pencil is suitable for sketches and of course writing like its main use in schools. 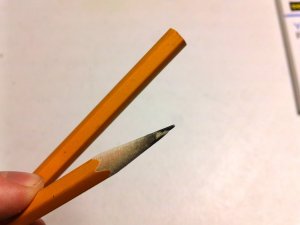 The wood being cheap makes it difficult to sharpen, making it lean more to one side or the other, the lead is also slightly off center. It’s cheap, but usable.

This pencil is a nice cheap way to sketch. And is useful in creating a draft for a sketch to be inked later. It being cheap it is available but it is also cheap, not the best pencil available. It does its job but it’s nothing spectacular.