Utility knives are an almost ubiquitous tool. They are inexpensive and easy to use cutting tools that are good on the job, at home, and for crafting and artistic tasks. And for most people they are used for jobs that scissors just can’t do. Even people who carry pocket knives can use a cardboard cutter now and then. But there’s a reason the blades come in 100 packs at 10¢-30¢ apiece. This set from Dollar General is about 20¢ apiece. How do they work?

To start, the packaging says they fit most utility knives, which I’ll believe. Their shape is similar to most other blades I’ve seen, and they fit my knife just fine. They lock into place with about as much precision as one would expect, which is to say not much. There’s play in the blade when installed, but it’s workable. They come sharp enough to cut paper, and strong enough to cut household plastics, which are both really things that are a bit out of the general use of the blade. They don’t dull immediately, either. That being said they don’t last for very long and the blade itself can be dinged rather easily. They are also pretty fragile. When I was testing one on plastic the very tip of the blade broke almost immediately. They’ll last about a hard day (or 2-3 give or take) cutting cardboard, longer in the house, shorter if you’re cutting more or heavier things (like they won’t last literally all day just cutting), and for as cheap as they are I wouldn’t expect much more. And if cutting cardboard cleanly isn’t a necessity they can last longer. Finally, they are smothered in grease in the package to prevent rusting, and while I haven’t left mine out I have no doubt that they would rust really fast. 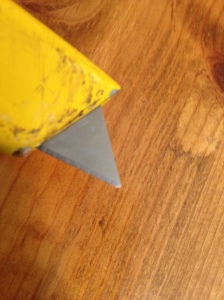 So are they great? No. But no utility knife blades are great.  They do about as well as expected, and are at least safe for their main function of cutting cardboard, rubber and the like. If you need the blades right now, or don’t need to buy many blades, these will work, but larger packs or ones with slightly higher quality would be recommended.