When it comes to crayons there is one brand that immediately comes to everyone’s mind (right before “and Roseart? Is that their name?”): Crayola. They’ve been making crayons for more than a century, and seem to really know what they’re doing. Their products are pretty close to ideal for school use, and can be used, in good hands, to even make fine quality art.

They’re simple and sturdy, with just a traditional paper wrapper that is almost instantly recognizable to anyone who was raised in the United States. They’re harder to make a mess with than markers and easier to use than colored pencils. Still, they don’t lend themselves well to more advanced techniques, like any type of blending really. But to solve that, Crayola has a (relatively inexpensive) box of their 120 “standard” colors (excluding metallic, sparkling, and retired colors) available to give you as many different shades as you need. I roughly organized this set and split it into 4 parts of 30 crayons each. Where I will go through and evaluate each color and whether or not getting the 120 is really that much better and the 64 or 96. 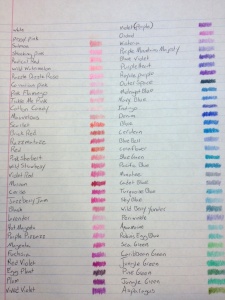 White – White is white, and on white paper, virtually invisible. There isn’t much of an off-white look either; it really does look like white paper on another color. It’s probably everyone’s least used crayon, but it’s good for highlighting, and covering an entire page without being able to see what your doing.

Piggy Pink – And very quickly we get to one I’m not really a fan of. Piggy Pink is a next-to-impossible-to-see color that, based on all of my observations, might actually be a pink hue. Maybe it’s for highlighting, but how often do you see that with crayons? I think it’s close to useless.

Salmon – Next up is a Salmon, which does look like the fish, though darker. Like most of the pinks it doesn’t cover well and is quite pale, but its still a pleasant color that could find a variety of uses.

Shocking Pink – Shocking pink is one of those fluorescent colors. It is easily the brightest pink and since the set has no “hot pink” it is a suitable replacement. It’s good for coloring 80’s clothing and aliens, but I suspect some could find more creative uses for it.

Radical Red – The name of this one is a bit of a swap, I think. It’s not really a red, much more of a pink (even with pink being weird as far as the light our eyes see and everything). I would best describe it as a darker, and more subdued, version of hot pink. Think the 90’s version of Shocking Pink up there, with much the same uses.

Wild Watermelon – Wild watermelon is quite an apt name for this one: it does look like a ripe (perhaps a bit overly so) watermelon. It’s a bright spring or flower color that unfortunately doesn’t cover well and has limited use.

Razzle Dazzle Rose – A color very similar to shocking pink, but with slightly different coverage properties (less even, but darker in spots). It is a bit darker and does give off a hint of the classic rose color, but it isn’t very spectacular.

Carnation Pink – This pink does resemble a carnation, but of course flowers range hugely in colors. It is a good flower color and covers well, but it’s too light to have many other applications.

Pink Flamingo – Despite the name being slightly misleading (it doesn’t really look like a flamingo, it’s quite a bit darker) this is one of my favorite pinks. It has a nice easy-to-see color, that covers alright, and has a versatile (for pink) range, from flowers, to berries, and even flamingo shading.

Tickle Me Pink – Lacking any knowledge about what color “Tickle Me” is I will say that this pink is a very similar one to the Pink Flamingo, it covers better and is a more “blueish” color. Filling many of the same roles, but being just a hint different.

Cotton Candy – Cotton Candy is one of the last “It is really hard to see this” colors we’ll have for a while (until lavender, and then not until yellows) but by virtue of it being one of those I am not a fan. It does cover surprisingly well, but it isn’t the color of cotton candy (at least what I’ve eaten) nor much else.

Mauvelous – Mauvelous is a wonderful pun and a nice-looking color. It isn’t the best covering one, but it is a light, purple-ish pink that is nice too look at. The one problem though is that the color isn’t mauve. It might be in the same realm (as in purple) but it wouldn’t have nearly the same uses.

Scarlet – Scarlet has always been one of my favorite colors. It’s a nice very bright red that looks good in highlighting, flowers, and anything that is generally a red color. It doesn’t cover as well as some of the other colors unfortunately. But it does draw the eyes while not being too overbearing.

Brick Red – Another apt name, this color is very much like a new brick wall with perhaps a dash of purple. It works for brick, obviously, and some older red items, like old fire hydrants and the like. Like most reds it’s all right in coverage, but lets the white show through here and there.

Razzmatazz – If I had to tell you what a Razzmatazz was, I wouldn’t be able to. I might guess that it would be a similar color to a raspberry, which this color is. It is also very much unlike Razzle Dazzle Pink, being a fairly dark pink/purple-y red that covers well enough. It’s good for berries and flowers and such, but I couldn’t pick it out in a lineup.

Red – A classic color there really isn’t much to say about. With coverage being much smoother than all of the pinks or pink-likes, and a pigment suitable for fire trucks, or apples it is an indespenable one.

Pink Sherbert – An interesting spelling choice on this one, but an apt description. This color would be very usable for frozen fruity treats. It is darker and covers better than most of the pinks and is quite soothing and cool looking.

Wild Strawberry – Wild Strawberry does look like a wild berry, but I’m not sure a strawberry would be the one I’d pick. It is a bit more purple/blue than most strawberries I’ve seen, but perhaps that’s just because I haven’t seen them in the wild. It is a nice raspberry or grape color as well, but like most reds it lacks good coverage.

Violet Red – This color is very hard to differentiate from the previous wild strawberry. It’s a little lighter, and a little more purple, but it has much the same use and properties.

Maroon – Maroon is one of my favorite colors in general, but it is generally a redish-brown-purple. And this version is distinctly less brown than is typical. I’d almost call Brick Red a more standard maroon color. It’s still a very nice, deep, satisfying color here, that gives the best coverage out of any of the reds. Unfortunately its uses are limited to shading, bruises, some clothing, and Texas A&M paraphernalia.

Cerise – Another color I am mostly unfamiliar with, but the name is quite accurate here. A purplish red, cerise doesn’t have many uses, save berries again. But it is a pleasant, lighter color that covers decently when applied.

Jazzberry Jam – Crayola seem to really like adding “z’s” to their color names, a theme that another color will follow before we’re through this first part. Jazzberry Jam is a lighter purplish-red and is indeed like many types of jams, jellies and berries. It’s got good coverage and is nice on the eyes.

Blush – Another good color name, Blush is exactly what I would have expected this color to be, or at least one of the variations. It’s a medium tone red-purple that covers very well and could be used as an actual blush color, unfortunately, despite it being nice looking, there isn’t much else to do with it.

Lavender – A fairly accurate representation of the flower, lavender is a light purple that is one of the more difficult crayons to see, and doesn’t cover very well, but is also one of the most interesting to look at. Not much to use it for, though.

Hot Magenta – This color is very similar to Razzle Dazzle Rose, with a dash more purple and some of the “atomic” glow taken out. I’m not a fan, and it doesn’t cover well, but it is seeable and not too hard on the eyes.

Purple Pizzazz – The final of the various “azz” colors, Purple Pizzazz is pretty unspectacular. It’s a light purple suitable for light purple things that covers all right. It’ll get use as an in-between color, but I can’t see reaching for it that often.

Magenta – Taking time off from Blues Clues magenta makes a good showing here. It covers well, looks very much like magenta, and because of that is nice too look at. Other than again flowers, berries, and the character, I’m not sure where it would be used, though.

Fuchsia – The hardest to spell color is also one of the hardest for people to pin down what exactly makes it (like chartreuse). Fortunately to that end it is a flower, and this color isn’t quite like the examples of the flower I’ve seen. But it would still work for other flowers and has good properties.

Red Violet – Another good color name, it is basically purple with a bit more red mixed in. Getting into these true purples though, means fewer and fewer uses, but better coverage, which this one has.

Egg Plant – And finally for this first part one of my (and certainly my mother’s) favorite colors (really just because it’s a goofy name) eggplant looks a lot like an eggplant. And it covers well enough that if you wanted to color an eggplant or shade some other purple color it would work perfectly.

And that’s all for the first 30 colors. Next time I’ll look at another 30 going from the purples to in the greens.