A ‘china marker’ or ‘grease pencil’ is essentially a hard, fat crayon that is used mostly for temporarily marking nonporous surfaces like glass, plastic laminate, tile, etc. They are an item that used to be pretty popular but have since waned as newer products like dry erase markers for temporary work on board or laminate, and permanent markers for less temporary weather resistance have come on the scene. Yet they still can be very useful when working with glass or porcelain. This being the case I was not surprised to see some in the hardware store, but I was slightly surprised to see that they were ‘Sharpie’ brand. Do they hold up in comparison?

The short answer would be “yes”. The Sharpie brand here is just an addition to an older, very standard design by Sanford. The body is just a version of their “Peel-Off” design. I have a fairly old (by surviving china marker standards, since using them destroys them) one that is almost identical in most ways. The body is tightly wrapped brown-ish paper that is sealed with a black, perforated coating. On this coating is all of the relevant information of the product, and beneath it is a small white string. Pulling on this string will create a tear in the coating that can then be used to tear off enough of the inside material to expose the tip if it is worn down. The tip begins exposed with a roughly conical spiral of the paper that provides a nice template when tearing off a bit later. While I do suppose that the item could be sharpened, it would be pretty wasteful and difficult which is why a system like this was developed. 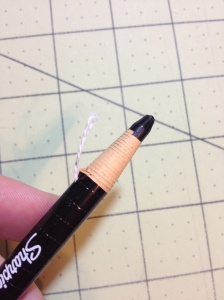 As for writing, I have a black version, and it behaves very similarly to a fat crayon. Line width and coverage are dependant highly on how much pressure is applied, but it almost never is a true “line” in that it doesn’t fill in the whole space when writing. It writes well on nonporous surfaces and often on porous ones, being again about as smooth as a crayon. For what it’s intended to write on it is relatively weather-and handle-proof (it can smear) but can be removed with a paper towel and some elbow grease. Nonporous surfaces are a bit more tricky, but in general there is a way to clean it off.

There are only two types of grease pencil/china markers: the mechanical version, and peel-off versions, this one being the latter. It is very hard to mess up a peel-off grease pencil, but it is also hard to innovate in that field. This shows neither. It was competently made, but not entirely ingenious. It lacks any innovation or improvement over the pervious generations, but it does mark what it was meant to mark (china) and more. The price and availability are also quite reasonable. If you desire to acquire a china marker, and don’t mind the fact that the “greasy” (waxy) tip is exposed, then this one will do everything you want it to.