Interesting tidbit with this review; I was ordering a replacement for this product (because spoiler: I liked it) and I ended up with something that I wasn’t expecting. While my original Mars Plastic eraser came in a humble card sleeve (as most still do) my new ones came in a fancy plastic swivel case. So this review will really be two parts. One for the eraser itself, and another for the upgraded container they can come in.

The eraser is a standard seeming white plastic/rubber rectangular prism that measures about 2½ x ¾ x ½ inches and is marked in a regular pattern subtly with the Staedtler logo on two sides; the four smaller sides are essentially flat. Since it is an eraser there isn’t much more to say about the looks, but how does it work? Well, I really like it. I go back and forth between hard and soft (kneaded rubber) erasers. I’ve currently moved back to the hard erasers because I can see when their ability to erase starts to be diminished more clearly (by being shorter rather than slightly darker). In my experience it has erased almost every pencil line I’ve asked it to, and it is better than the ones usually found at the store (save Magic Rub), but comparing higher end erasers is very difficult. They all do their jobs well and it’s mostly a matter of personal preference (and sometime pencil choice) as anything else, but that’s where a fancy plastic case might stand out and make a difference.

The case is slightly larger in every dimension (duh) than the eraser. The top and bottom are made to resemble the traditional card-wrapped eraser, with a white bit extending from the blue eraser identification part. A larger Staedtler logo covers the pivot on one side in this white area. On this white end attached to the pivot on the inside is a cut-out box that is about an inch on one side and an inch and a quarter on the other. This box has eight small ridges on the inside to grip the eraser, and it pivots 180 degrees from having the eraser tucked inside the rest of the case to being fully exposed. It can go farther, but at risk of breaking the back of the case. This allows for easy dispensing of the eraser with one hand and provides a nice sturdy handle when erasing. It also protects the eraser from getting gunky or gunking up other things (the inside does get a bit dirty/gunky sometimes, though). I’m a fan of the case (but being nitpicky the two smallest ends are rounded off and the eraser will not want to stand up on them). 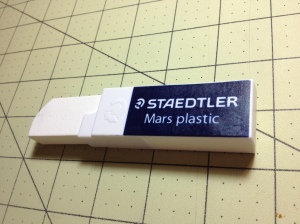 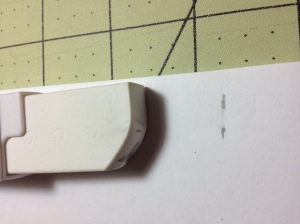 So in the end the Staedtler Mars Plastic is a good, but not exceptional, eraser. It’s not like it erases every pencil line in one stroke, or is virtually crumb-less, but it does get most pencil lines with relatively few crumbs. It works well, and I really like the case for the convenience and protection it provides. I’ve been using it (and flipping it open compulsively) for a bit and it doesn’t show any signs of breaking soon. Though it does make the eraser a considerable bit larger and limits use of about half of it. It’s a nice change of pace and experiment if one wants to spice up their eraser life.