Have you ever been using a mechanical pencil and thought it was too much of a hassle to push the button before writing more? If so (Dixon) Ticonderoga claims to have you covered, with the Ticonderoga Sensematic self-advancing pencil. 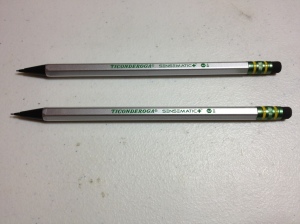 The body of the pencil looks like a standard pencil, but is a bit shorter. It has hexagonal sides, and a standard eraser with a metal attachment point, which screws out and contains extra lead to refill the pencil with. The tip is conical, and contains the self-advancing mechanism, from which the lead sticks out a bit. 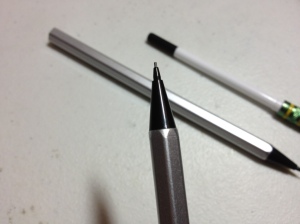 The lead is a standard HB (#2) and is nothing really special, so I won’t say much more other than it works. The real thing to talk about is the mechanism, which the box says one can simply “just write” with and the lead will advance automatically. And, in my experience so far, this is true. I haven’t had to change anything in my writing to make it work: it just does, making it quite a handy little thing. Now it doesn’t have a very long advance, so there isn’t much lead to work with, but for writing and some sketching that isn’t a problem at all. The mechanism works by having what is essentially a click-advance near the top of the exposed lead, and when it is pushed back more lead is exposed and then locked into place. This means that there could be instances where writing stops, but this could be easily solved by rotating the pencil.

Overall, this is a great idea with good execution. I quite like it but since the erasers aren’t replaceable and the mechanism feels a bit plastic-y I’d say they won’t last forever. But they will last at least as long as a regular pencil, with much less of a hassle, so I’d say it’s a win.