Pencil extenders are something I haven’t looked into very much. I am able to “comfortably” use a pencil well into a stub, and would just as soon have that stub as a backup and get a new pencil when it gets smaller (and now I’ve mostly swapped to mechanical pencils). But that does mean I have quite a few stubs lying around, and maybe with some inexpensive “Chinese” (don’t know for sure, but it seems likely) pencil extenders I can breathe new life into them. 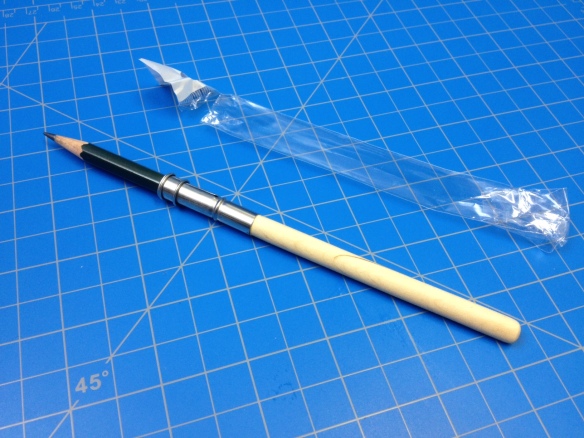 This one is a bit of an anomaly to me as I didn’t get it myself (it was a gift), it has no identifying markings, and I can’t seem to find it specifically online anywhere. I have found an eBay listing that highly resembles it, but I don’t quite know about it. Still, it is strikingly close to other, more hexagonally shaped versions that can be found all over the place and likely use the same collet. 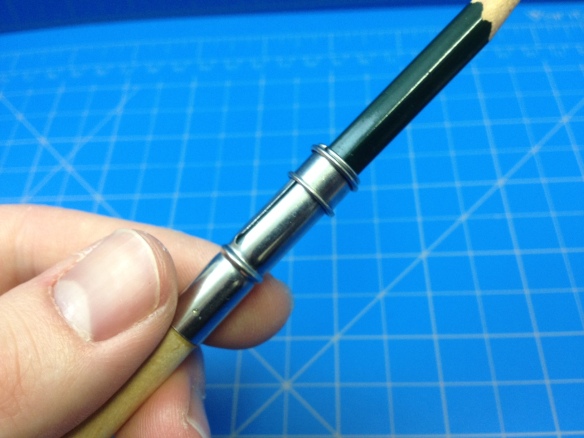 The device is immensely simple: a rounded wooden dowel is crimped to a tube of metal with a slit near one end and a separate metal band wrapped around it. When a pencil is inserted into the metal tube the band can be slid down to tighten and secure the pencil stub in place. It’s basically a collet that slides instead of screws, and while it works there are some problems. For example, the pencil stubs that can be used must be of a very specific size. Standard hexagonal pencils fit (think Paper:Mate Americans) but the larger art pencils and every round pencil I’ve found (including all colored pencils) have been too big. In general it seems a coat of paint is all the difference it takes between fitting and not.

And even when a pencil does fit it isn’t held very securely. Sliding the metal collar does clamp the collet tube down a bit but a good tug and the pencil comes free, though it is held in well enough that typical shakes don’t knock it loose. And the metal tube itself isn’t very well fitted to the wooden body and the two can easily be persuaded to part ways.

Still, with the cost seemingly being almost nothing, it does a tolerable job. The pencil is held securely enough to write with, and can be used comfortably as long as there is still pencil to grip (the collet is not a nice bit to hold on to). It is fairly lightweight, which is good for portability but bad if you really want your pencil to feel the same as it did when it was longer. And even though the construction is shoddy they cost about as little as a pencil or two so if they help you finish a couple they’ll’ve been worth it.