Ink-washing is a great way to improve the look of ink drawing, but diluting India ink and using traditional brushes can be messy and a hassle at times. Gray brush pens certainly do help and the Tombow Dual pens have both a brush and marker tip to make using grays easy. 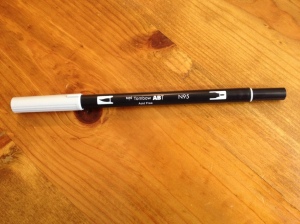 On either end of the marker there is a cap. One is quite a bit larger than the other, in both length and circumference. Both have ridges for easy removal, and small inner caps to prevent what they’re covering from drying out. The larger cap also has a fin to prevent it from rolling too far on a desk. The caps are made in such a way the that larger cap can “post” over the smaller one, and the smaller one can post into the larger one. They’re both sturdy and work well. The section for the larger brush side is nice and tapering. It’s long and easy to hold. However, the one for the marker side is quite stubby and holding on the body is almost necessary. The body itself is plain: a cylinder with text, Necessary information is there and it works.

The pack I have is a pack of five grays and a black. The black is fairly understandable and a bit warm. The other grays purport to be “cool” but do vary from cool to warm, in my opinion. Several of them are also far too dark to really be distinguishable, but that also is just my opinion. The N95 and N60 are the most distinctive. Being very light and easy to work with, and very warm, turning to green after a while, respectively. The 45 and 55 are barely distinguishable and the 65 is about halfway between true white and true black, but all three get very dark very quickly and none of the five easily make a smooth edge, they are too varied in color to do so. The colors are all acid free, making them archival quality. And while they are water-based and claim to be blendable, I find that once they absorb into paper or card they are almost immovable. They go on smooth, the brush has quite a bit of variance but can be fragile (it is a sponge-like and not a bristle brush) and the marker is quite consistent and rigid. They can be used for several large projects or quite a few little ones, but can’t be expected to last longer than any other felt-based markers. 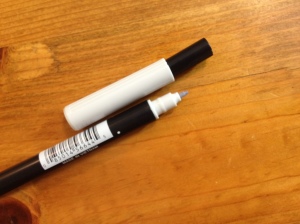 In the end, they are great for someone who is just trying to get a feel for the grayscale washed look but is frustrated with, intimidated by, or doesn’t have to time for mixing up one’s own wash. Some other supplemental brush pens might be needed to get the full effect out of the shading, but these are a good start and the double-ended aspect makes them more useful than similar pens.

The ink comes in a tiny well with a small dropper. There is not nearly the same volume of ink, but the bottle takes up about the same amount of space. 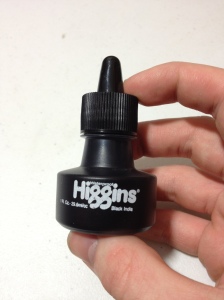 The ink itself is very black. Very, very black. It is waterproof and a little thin. It can be used to create a very dark line right out of the bottle, or diluted with water to make various shades of grey. Unlike the fountain pen ink, which turns a greenish color when diluted, the ink remains black or grey. It colors the water completely black no matter the solution, so measuring the amount of the mixture before hand is recommended.

Overall the ink is superb for what it is made for, which is brush inking and ink-washing. It is very dark and handles very well. It dilutes nicely to create shades, and covers well when it does. It does take a little practice to get good at using it but when you get the hang of it it works wonderfully.