When looking for some sticky tack to put that poster up on the wall without using push-pins, one usually looks for the Scotch brand. After all, they do know how to make things sticky. But one may also find Simply Tacky a (terribly named) product that does the same thing. Is it worth it to search for the right brand? 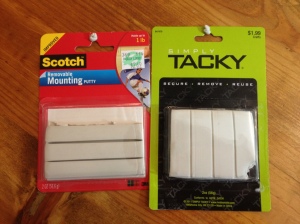 To start off with, both items come with very close to the same amount of product. The Scotch packaging is slightly smaller, and more packed with use information and diagrams. Both are cut into four similarly-sized bars. The Scotch is the only one with a weight limit (of 1lb). Both are quite white, and are easy to pull apart and shape to stick onto a surface. Both are very grippy, with the simply tacky being a little more malleable and aggressive. It breaks into pieces more easily, though. 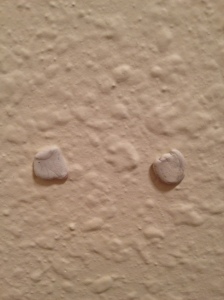 As for what they can hold I’d say it’s about equal. The Scotch says it’s up to a pound, but they don’t tell you how much product to use. With a tiny, equally-sized bit of each product (weighing less than a gram) I was able to hold 70 grams (2.4 oz) easily, and I’ve held up to half a pound products stably up with enough (It will do up to a pound, but only in certain configurations of putty and object). Putting that same small piece of product up with a 7oz (198g) item, both failed fairly quickly with the Scotch maybe a little faster, but I’d chalk that up to my tests being not completely scientific. 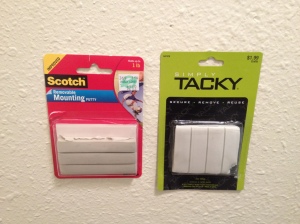 Overall, I’d say both products are really the same on the user’s end. Their uses are the same, price can be more or less in favor of each brand depending on where one shops, and they hold almost equally well. If you’ve got a choice in the aisle, then I’d say take the cheaper one, but it’s not worth another trip to get the right brand.

Sometimes you don’t want clear tape, whether it’s to obscure, or to label by color, or the transparency just doesn’t matter to you. Scotch has also got you covered in that area with its plastic tapes, so called because they are made out of plastic. The roll I have happens to be red, but they come in all sorts of colors. 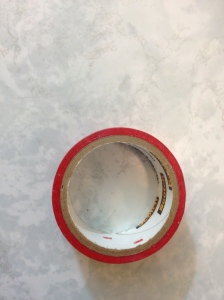 Really this can just be rated by its stickiness, and as such this review will be short. It is suitably sticky, if you have something that needs to be stuck temporarily or is quite light it will get the job done. It is as strong, but less adhesive than, the average electrical tape, though it’s possible it could serve that purpose. What it’s really great for is labeling things. It sticks quite nicely by itself and can be used as a color code or is easily written on with most writing utensils, though it could smear easily. When it comes off it leaves little to no residue, and can potentially be reused, though only a few times.

It’s a good tape, not a life-depending tape. It does the job of the regular transparent tapes while being less see-through and easier to pull off.

If reviewing Scotch Tape means I’m out of ideas, then call me out of ideas (I do have plenty more things to look at, though). But really, who doesn’t have a use for tape? And when buying that tape, couldn’t shaving off several pennies save quite a bit of money over time? Is the brand name really worth it (It’s pretty generic-sounding, now, isn’t it)? Let’s see.

First thing, the container: Scotch Tape comes with a clear plastic, simple, but quite durable dispenser. The roll of tape is clicked into place on the wheel and at the front are several teeth for separating the tape into strips. Is any of this the best quality? No, but it gets the job done, and very cheaply. If one has a tape dispenser that they like, individual rolls can be bought, so I’d say that this works quite well.

Now onto the tape itself, which certainly isn’t “magic” or “invisible”. The stuff I’m looking at is just labeled “transparent”, and that it is. The tape is easy to see through and sufficiently sticky that it will hold most documents together without a problem in either holding or reading. In fact, the tape itself is very strong, and the adhesive is more likely to break than the tape itself (or perhaps what it’s taped to). Given that it does have a certain rigidness to it, though, it isn’t a tape for repairing any item that, like a tool, will be used, or will move. It is surprisingly strong, but really only good for paper products.

Now, is it worth it to buy Scotch Tape and not some other tape? Given how inexpensive Scotch Tape is already, I’d say yes. And if it isn’t right where you’re shopping, I’d even hunt around for it. The two rolls that come in a pack for around a dollar will last for quite some time. And I’ve seen other brands for around the same price that cease to be sticky once they came off the roll. In short, there’s a reason we say “Scotch Tape” and not “transparent adhesive tape”.