With so many options, one carton cutter review just wasn’t enough, and I am now back to review one that has a higher price. But does that make it better quality? 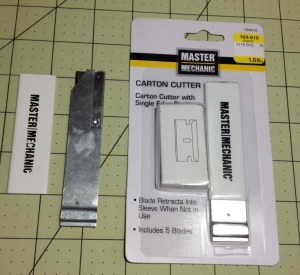 The short answer is yes: it is better quality, but I’ll just go over a few things. The cutter has a bent and nicely shaped/joined sleeve made out of an unknown metal (probably steel), with an insert that is a folded piece of metal that will hold a razor blade. It also has a cutout “spring” that creates the tension instead of the body doing that, making it more pleasant to use. The sleeve also has a nice, easy-to-hold white paint applied, which makes it easier to see. The Master Mechanic logo that is printed on top of this looks nice but wears off easily and looks unsightly when it does.

Use is easy and smooth, tapping (a hard surface) both to deploy and retract the blade-holding mechanism (placing the back on a hard surface and pushing firmly will deploy the blade, and doing the reverse with the blunt part of the front will retract it), but it does have a way it “likes” to go in and works better that way. The razor blades that are included are also slightly better than the cheaper knife, but in general one won’t get much use out of single-edge razor blades, which are sharp but cheap and prone to snapping or deforming. 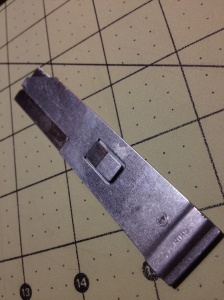 Is it worth it to buy a better version of such simple product? Probably not for most people. While this is a better carton cutter than cheaper ones, it isn’t really less dangerous or easier to use per-se. The fit and finish are as good as one could reasonably expect on a product this cheap; the amount of friction on deployment is constant; and the device will likely last for a long time. Still, a carton cutter isn’t a tool most people will be worrying about, and the less expensive ones would be easier to replace if they were misplaced or damaged.