Now in the second part of my Sharpie color reviews I’ll be talking about the blues, a nice and varied set of colors. 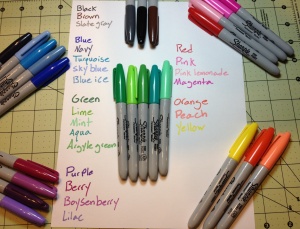 Blue – Blue is a very classic color and it looks quite a bit like the standard blue we’ve come to expect from various markers and pens. This one is a bit darker, though. The ink is more wet than the other standard colors and bleeds a bit. It’s also too dark to be natural and almost too much to be organizational, it is a bit too close to black in dark conditions, but with good eyes it can work. Still, it is very blue. 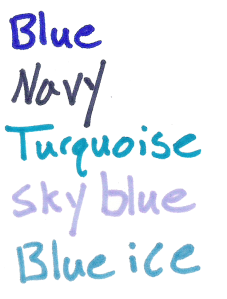 Navy – This color is very close to the classic navy color, a bit close to black in low light, but it looks like a lot of navy colors. It’s a very dry color and has very little bleed and feathering/spreading. It’s a nice-looking color, but not a very useful one.

Turquoise – Turquoise is a difficult color to get down in ink, and none of them look quite like the stone. This one’s a bit dark, but it does make a good blue-green tone. The ink is very wet, and bleeds easily, but has very minimal feathering. It’s a very natural and pleasant tone, great for organization and for artistic purposes.

Sky Blue – This blue, like most of the blues in this set, is darker than it really should be. It’s more of an evening sky blue, or a wispy-cloudy blue. It bleeds a bit more than the turquoise and the blue, and is just as feathery. It’s a very nice looking and easily identifiable color that many office and artistic uses can be found for.

Blue Ice (Possibly Mystery Blue) – This color is the most contentious of the colors in my current review lineup. The package of markers I received was not marked, and of the other blue colors I looked at this one seemed closest. If you believe I am wrong in my categorization, I encourage you to leave a comment. This blue is a cool blue that I would say has no direct natural counterpart (certainly not ice, as this is the least aptly named), but it could be used as a substitute in many cases. I prefer it to the sky blue as a light blue. It can be used in art if one is creative and is very distinguishable from other colors for organization.

Overall, I really like the blue Sharpie colors. They are a bit bleed-prone, but they have a variety of uses and in many cases are work-appropriate. The tones are very natural and appealing. They’re a good set to get, if one can.

Next time I’ll be looking at a few of the greens that Sharpie has to offer.

And now for part 3 of my look at the 20 colors of Papermate Flair pens. This time I’ll be looking at five of the cooler colors in the lineup. I’ll just get started. 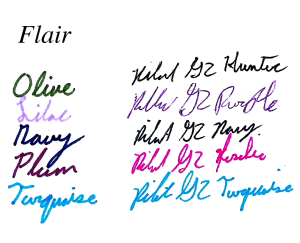 Olive – Olive is a nice green, forest-y color that looks quite natural and is very pleasant. It is quite conservative and laid back. One might be able to get away with using it at an office, but it’s unlikely. In poor lighting it almost blends in with dark blues and blacks, though. On the smearing side it’s one of the worst, easily smearing and becoming unreadable with contact with water.

Lilac – It’s a light purplish color that is smooth and quite easy to look at. It wouldn’t be appropriate in most offices, but in many a field of flowers there are similar colors. The color looks almost washed out before water is applied, but it smears and feathers probably the least out of the entire set.

Navy – Navy is a very dark, office-appropriate blue that goes well in most places. Artistically, it would be most at home in the dark, but there may be other applications. It does smear, but very little, and it is often readable afterwards. The main problem when water is applied is that there is so much pigment that it covers a wide area with a bluish tinge.

Plum – A bit off from most of the fruit I’ve seen, this plum is a dark, red-ish, purple color. It could pass for a plum still, just not one from a supermarket. It could also make its home in an office for a bit of fun, but not for everything. It bleeds, feathers, and smears pretty badly, but does stay mostly readable.

Turquoise – Turquoise is a nice color at points, but it shades quite a bit, and the color variation can at times be unpleasant. It’s a good sky, but doesn’t look like the stone, and going over it multiple times will turn it into more of an aquamarine. If your work doesn’t have a problem with blue, it should still work. With a wipe from water nothing changes, but if left for a few moments the color dissolves completely and is unreadable.

And that’s it for part 3. These colors are some of my favorites in the set, and much more usable than their warm counterparts. Next time I’ll be taking a look at the remaining 4 pens, which aren’t officially named anywhere I can find.

Now onto the Sheaffer inks in the Sheaffer Calligraphy set, which I will do in batches as I get around to trying them out. I’ll be starting off with black, purple, blue, and turquoise.

First black, which is a plain black, really there is nothing special. It’s a cool black that is very dark, but is not as saturated as one would want a black to be most of the time. For calligraphy and drawing it is good for the most part (being non-waterproof) but I wouldn’t go painting a picture with it.

Second purple, a color that has no place in a calligraphy set (something that can be said about every color that isn’t black, in my opinion). The purple is a nice deep purple with lots of shading in wider lines, though the shading doesn’t offer a great amount of variation. I personally wouldn’t use this for calligraphy and would have a hard time finding a use for it. But it is very pleasant.

The blue, Sheaffer blue, like all pen maker blues is very simple: a dark blue without much shading that does well with writing and okay with calligraphy. It is a fairly standard blue, non-waterproof and it almost looks like a ballpoint pen. Like I said, though, it is a bit darker than some others, so you might want to look into it if you want a darker blue.

Finally turquoise, which again I don’t understand being in this set. It is a very bright, nice color. It has some shading (which I’m not too fond of) but overall is fairly bland. A nice sky or Caribbean sea color, but not one for calligraphy but for daily writing in my opinion. You wouldn’t want to color a turquoise rock with it either.

That’s it for this time, It may take a few weeks, but I’ll look at the rest of the colors sometime in the future.

And now for five more Pilot G2 colors! These are the the more “regular” colors, but just a bit different, so let’s go.

The first is pink, which is very pink. It’s probably the brightest and most visible color in the set, though it fortunately isn’t an eye-searing hot-pink. It runs fairly thick and as pinks go, is quite deep, closer to red than to rose.

The second is orange, which is fairly bright, the second hardest to read of the bunch. It is plainly orange though, and will be a stark contrast to any other color in the set. Like most of the other colors, though, it is done well, and is not painful to look at or too difficult to read.

Fourth is burgundy, which is a deep, purplish red. It’s almost like a red-black. It is very readable on the page, but gives writing a bit of flair not seen in a red, black, or purple ink that would be close. The ink is a bit thick though, and has some starting problems, but that just means it should be used more often.

And lastly for this set is lime, which is obviously a very light green. It actually looks nothing like a lime (like most colors called lime). It is the hardest to read of the bunch, but still isn’t quite offensive to the eye, though I wouldn’t write with it. I think it’s still the worst here, though, as it doesn’t match the nice qualities of the rest of these inks, and it’s a bit dry on the page.

Next up are the more uncommon colors.