PaperMate isn’t exactly known for making the most high quality products in the world. But for the most part they do make products that get the job done in an inexpensive and readily available way. And that philosophy is very apparent in the 48 pack of “Write Bros” mechanical pencils, which generally sells for as little as a 2 pack of more well-regarded pencils. Are these the perfect solution for someone looking to supply a group on the cheap/keep losing their own, or are they too fragile to be worth it? 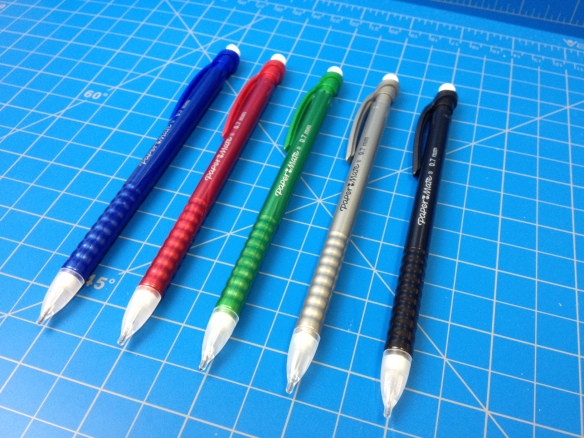 The bodies are similar in size to a normal wooden pencil, but a bit shorter at just over 6”. Molded in a slightly pearlescent plastic and one of 5 average colors, they have a ribbed grip section for the last inch and a half of the barrel, followed by a cheap-looking frosted plastic cone that is screwed onto the end and from which protrudes a small plastic “lead-pipe” and lead from inside that. Near the back of the pencil, there is an exposed click-advance mechanism with an integrated pocket clip that moves with activation. On top of that is a small white eraser, which can be removed to expose the lead chamber and allow refilling. Oddly enough at this price point, the item can be further disassembled by unscrewing the frosted cone on the front, at which point the entire advance mechanism will essentially fall out of the back of the barrel. There is nothing useful that can be done from this point, but it is interesting to look at. 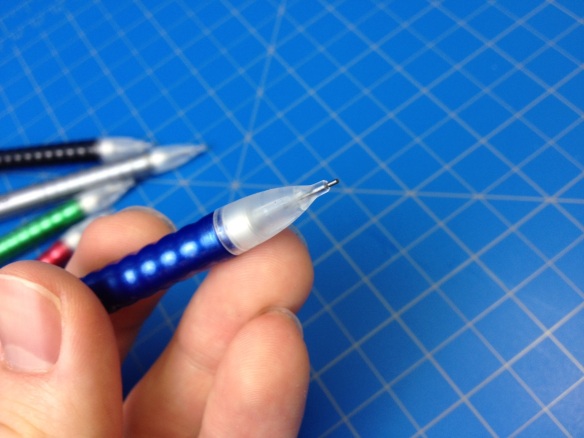 Performance is so-so to average. The 7mm HB lead is what you would expect at the price, a bit scratchy and softer than advertised (prone to breaking). The clip technically does its job but I wouldn’t count on it, and the plastic is brittle enough that it would easily snap. As far as erasing goes, the eraser is superb, but it is a small size and virtually vanishes when put to its task. The feeling of the click mechanism is unsatisfying but inoffensive in any way other than it feels like it will quickly break. 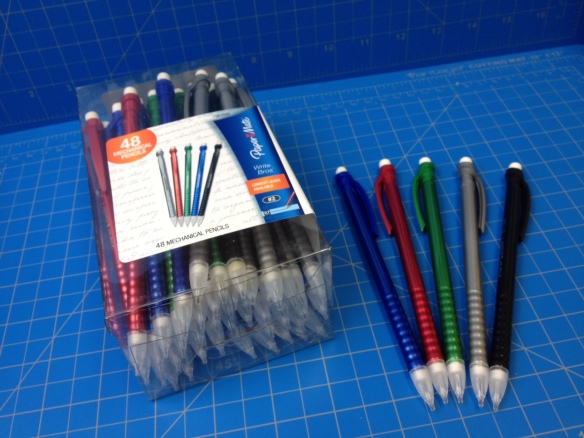 Basically you get what you pay for, which in this case is not much. Even PaperMate didn’t bother putting a name on these pencils (I call them “Write Bros” because that’s what’s on the box and online, but the items themselves only say “Paper:Mate”, and “0.7mm”). But there isn’t much terribly wrong with them. If they are intended to be essentially “disposable” mechanical pencils, they succeed. Each has two leads (though many of mine were broken and thus less useable) and an eraser, enough to be useful, but little enough that the poor and brittle construction will be able to survive that use. They don’t seem to be meant to be refilled, as they aren’t worth the trouble, and being used much more would likely result in broken clips and eventually mechanisms (but it is a possibility for a little bit). And putting aside environmental or frugality concerns they are an inexpensive and relatively comfortable way to provide functional pencils to a lot of people, or many pencils to one particularly careless person.

If you are ever in dire need of a mechanical pencil, and somehow find yourself at a shop that doesn’t sell Paper:Mate Sharpwriters at the price of whatever change you have in your pocket, or even at all, the Western Family mechanical pencils may be a cheaper, and click-advanceable, alternative. But are they actually useable? 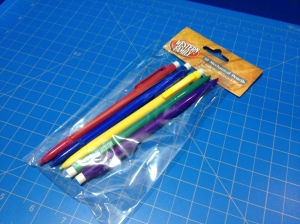 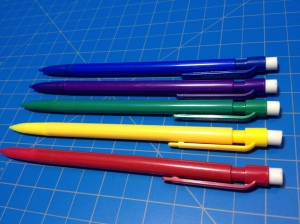 The body of the pencils is very simple; a smooth cylinder for the barrel with a tapering and fluted (for grip) cone leading to a plastic nub (lead pipe) at the front (this part is free spinning but doesn’t appear to detach). At the back is a nothing-special click mechanism with an integrated plastic clip (that does indeed clip to things and hold it in place, but is pretty flimsy) and a small white eraser on the back. Removing the eraser (which actually fits down inside almost all of the click mechanism) reveals the inner lead-holding tube, which comes stocked with one extra lead per pencil. The entire click mechanism can also be removed for more direct access. 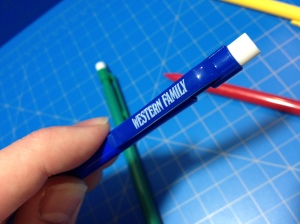 The performance is nothing to write home about. The HB 7mm lead is, as one would expect, fairly soft but not too soft, and a bit wide for people like me (I prefer 5mm, but I can live with 7). The eraser does indeed erase: it gets rid of most regular graphite marks but can be used up very quickly. The barrel of the pencil feels sturdy, but the ends are flimsy and plastic-y with tolerances that aren’t very tight. 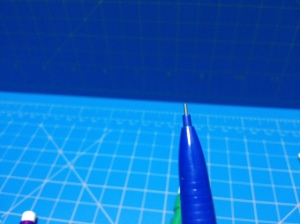 Overall the package is fairly bare-bones, but functional. I wouldn’t use them as my main pencils, but they’d work in a pinch. For only a few dollars you get 10 pencils (in 5 terribly boring colors) with 2 leads each and a body and eraser that will hold up probably no longer than it takes to use those 2 leads (the clip being the weakest link there). There is nothing particularly appealing aesthetically about them and no information (like lead size) other than “Western Family” printed on them. They’ll work for scattering about for use if you can’t find your normal pencil or for loaning to people who don’t care about the pencil (like at the office, or playing D&D) but I can’t recommend them for any other reason.

Papermate has been making pencils for a long time, and one of the simplest and least expensive mechanical pencils available is one that they make. These pencils are some of the cheapest on the market from a name brand, and always come in packages containing a large number. They are almost universally recognized as one of the lousiest pencils to use, but is that reputation deserved? 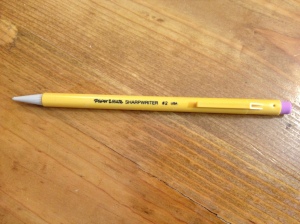 Starting at the back, it’s got a small, pink eraser that does indeed erase (quite well, actually,) but, like most erasers at the back of pencils, it won’t last very long. Moving down from that, we have a basically straight and plain body, with a terrible “clip” near the eraser (it doesn’t actually clip on most things the thickness of shirt pockets). The basic information about the pencil is physically molded in the side, with no other features on the barrel. It looks slightly slippery but does grip with no problems. 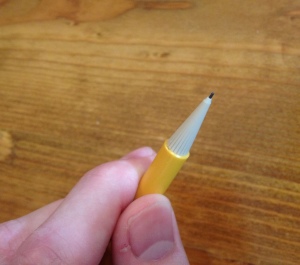 At the front of the pencil is the lead-advancing mechanism, which one must twist both to extend and retract the lead. This is inconvenient, but not more so than a top click. This twist mechanism is flimsy and easy to break if one goes too far, but not too noticeable when writing. The lead is technically refillable, but the pencil is almost treated as disposable, so it isn’t worth it.  The lead that comes with the pencil is fine: it’s a #2 and it works fine for most purposes, even erasing well with the eraser. There is also a “shock absorber” in the pencil (I believe it isn’t a special thing but inherent in the design) and it works!  You can press down quite hard and the lead will simply retract a few mm instead of breaking, but writing like this would be fatiguing and still cause the lead to break, since the spring is only absorbing force in one direction.

Is it a great pencil? No. Is it a bad pencil that will explode when you take it out? No. It works.  It’s a bit finicky at times, and I feel like I could break it with my bare hands and minimal effort, but under normal use conditions this isn’t a problem. The clip is the worst part, and if you need a good one I’d steer clear of the Sharpwriter. If you’re looking for the one pencil to have forever this is also far removed. But it is quite versatile and quite inexpensive. (Adam Savage of Mythbusters likes them: https://youtu.be/uN6vptYpo5I?t=2m15s) And if you lose pencils often, or are getting them for an office, I’d at least consider it. 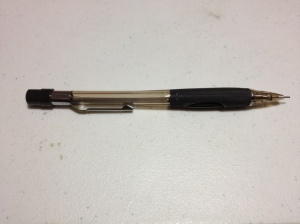 Starting from the back of the pencil, there is a small piece of plastic with a few breathing holes to cover the eraser, which is a fairly standard, white, mechanical pencil eraser. Following that is the metal clip, which is really clip-y and will make sure this thing stays put without ripping your shirt when you take it out. Engraved at the top of this clip is all the pen’s information. It’s a little less information than I would like, but it is all the necessary stuff. Past that is a slightly smoky tube which is quite thick, and contains all of the remaining leads and has them easily visible. The grip is next, which is a hard-type rubber with small wave-ridges, making quite a comfortable grip. Inlaid in this grip is a small side-advance lever that is made of plastic but feels very solid. The front of the pencil is a small plastic cone that is slightly smoky like the barrel, with a small, thin metal tube the lead will feed through. There is, unfortunately, no method of preventing the lead from breaking. 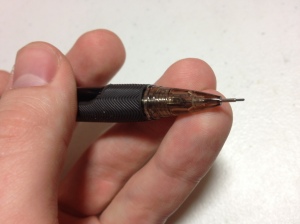 The lead is 0.5mm and comes standard in HB. This hardness is the same as a No. 2 pencil. There really isn’t much to say about it: it is a high quality lead that resists breaking to some degree and goes on the paper smoothly. It is a little bit soft for me, and I feel that the line variations caused by varying pressure on the pencil happen a little too quickly for me to enjoy it as a daily writer, but as a sketcher it is great, depending on what you prefer. It definitely isn’t as soft as some would like, or quite as hard as some others (me) would like, but it gets the job done well.

Overall, the Pentel Quicker Clicker is a nice little mechanical pencil for a low-medium price. The side-advancing feed is great for not accidentally advancing the feed while erasing, and makes it more efficient to advance the lead and write faster. The lead, clip, and eraser are all serviceable, making the slim metal tip that allows lead to be easily broken the only detractor from the overall package.